A letter to Danila

(what you hoped for,

and were denied through your lifetime) 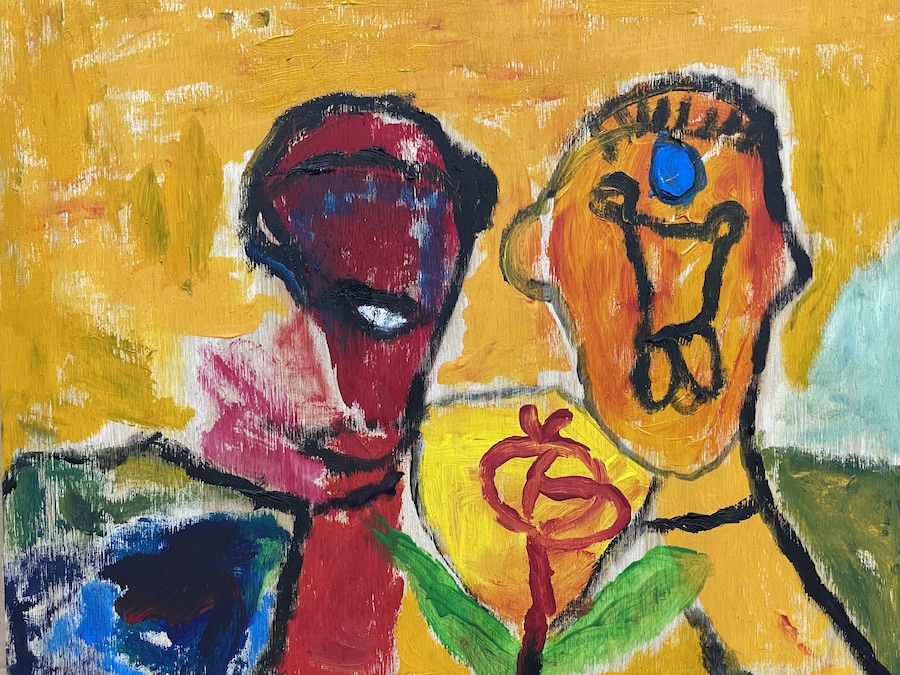 Domenico de Clario, ectoplasm two: planting of tulip 1955 (for all to deeply believe in the power of the moment while disbelief in your purity was being trafficked), 2021, oil on plywood, 45 x 60cm

‘A Letter to Danila’ began its gestation a long time ago, when I first came across black and white reproductions of Danila Vassilieff’s paintings in my high school library. I was immediately struck by how authentically the images conveyed the feel of Melbourne’s inner suburbs in the 1950’s, a feel I had experienced personally in 1956, upon arriving with my family from Italy and settling in Smith Street, Fitzroy.
Vassilieff’s paintings, sculptures and quixotic lifestyle continued to intrigue me over the next few decades and when I relocated to Mildura in 2015 I was eager to understand how he might have lived his last few years in an abandoned fisherman’s hut located along the banks of the Murray River not far from my current home, and how both his psyche and his work had been affected by this end-of-life experience. ‘A Letter to Danila’ was born during the last half of 2016 as I walked along the Murray (for a project titled ‘Walking Slowly Downhill’) from source to mouth, pondering much of what has unfolded in this part of the world over the tens of thousands of years that FIrst Nations people have inhabited its banks, and how 18th and 19th century arrivals from elsewhere have responded to its uniquely complex landscape and its ancient history.
Vassilieff challenged many aspects of what he found in 20th century Australia and his life and work might be seen as a compendium of  the experiences of a restlessly questioning being, paradoxically both sublimely sensitive yet bent upon insistently challenging of the social context he found  himself in. He consequently lived the life of a revolutionary artist, perhaps even that of a romantic idealist, who, though endlessly maligned and ruthlessly neglected,  never slowed his quixotic quest to transform his immediate world through an embracing of the creative.
The seven works in ‘A Letter to Danila’ homage both the life and work of this unique Australia artist.