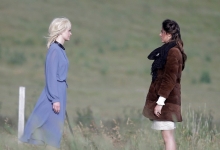 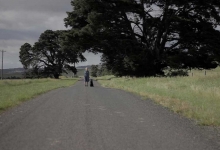 The psychology experiment known as the ‘Ganzfeld’ effect—in which a subject deprived of both audio and visual stimulus is said to involuntarily experience otherworldly visions—provides the framework for Brie Trenerry’s cinematic appropriation, restaging and indeed merging of two classic Giallo horror films from the 1970’s directed by Lucio Fulci. The anxious female protagonist from “The Psychic” takes a symbolic detour to meet the minor but unforgettable figure of the blind girl from “The Beyond” —a figure we first see from a distance standing with a dog in the middle of the road, calmly waiting for her visionary counterpart.

Brie Trenerry has exhibited locally and internationally since completing a Masters by research in 2002 and has lectured in video production at VCA, RMIT and VUT. Recent and upcoming exhibitions include Video Arte Australia y Nueva Zelanda, Matucana 100, Chile (2014) Video Contemporary at Sydney Contemporary 13 , Sydney (2013) Epilogue: LongPlay Cinema & Bar, Melbourne (2013) The World Below at White Night Melbourne (2013) 120 Seconds Federation Square (2013), The Office of Utopic Procedures, The Aesthetics of Joy-The Infinite International of Poetics (2010) Imaging the Apple, AC Institute, New York (2010).  In 2014 Trenerry will curate the MARS gallery video space in its new location in Windsor, Melbourne.